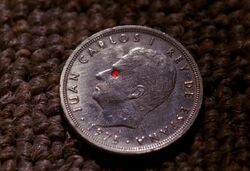 The sonic wave emitter was a device created by Marshall Flinkman. It was designed to look like a Spanish peseta.

While Sydney was visiting an auto show run by Eduardo Benegas, she took the sonic wave emitter with her to provide a distraction. Using Marshall's advice, Sydney dropped the coin beside a large glass pane and walked away. She then took out the coin's detonator (which was disguised as a pen) and set off the wave emitter, causing the glass to shatter. Sydney quietly ran away from the party while all the guests began to panic from the noise.