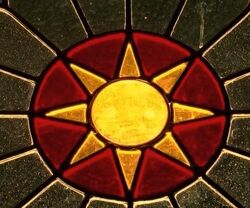 Sol D'Oro (or the Golden Sun) was one of two Rambaldi artifacts that revealed the location of the Rambaldi's journal. While it looks like glass, it's actually a synthetic polymer.

Upon deciphering the binary code Sydney and Anna found, SD-6 figured out that another Rambaldi artifact was located in a church in Málaga, Spain. Sloane sent Sydney to the location, where she discovered the artifact embedded within one of the glass panes. However, just as Sydney recovered the artifact, Anna showed up, and the two got into a short fight. After Sydney handcuffed Anna to a table in the church, she took the artifact and left (A Broken Heart).

Once Sydney retrieved the Rambaldi Clock, Marshall placed the Golden Sun inside the device. Together, both artifacts showed the location of Rambaldi's journal near a mountain in Argentina (Time Will Tell).