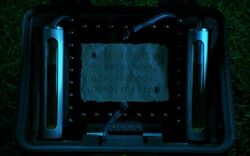 The Rambaldi Machine Code was one of two Rambaldi sketches that revealed the location of the Sol D'Oro.

The Rambaldi Machine Code was originally owned by Eduardo Benegas. When SD-6 and K-Directorate found out about the sketch, they each sent a team of agents to recover it. Although Sydney managed to get the box, SD-6 didn't have the key; K-Directorate did. SD-6 and K-Directorate came to an agreement: Anna Espinosa would meet with Sydney, and together they'd open the box and see what was inside (Parity). The agents opened up the box and found a sheet of paper containing binary code. After the box was opened, two vials of acid began to pump into the box and the code slowly began to disintegrate. Before the paper was fully destroyed, both agents memorized the code and parted ways.

Sydney intended to give SD-6 the wrong binary code; but was stopped by Michael. After much research, Marshall figured out that the code led to a location in Málaga, Spain (A Broken Heart).

Retrieved from "https://alias.fandom.com/wiki/Rambaldi_Machine_Code?oldid=8950"
Community content is available under CC-BY-SA unless otherwise noted.