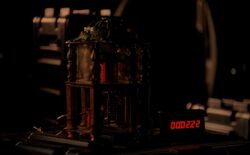 The Rambaldi Firebomb was a powerful microwave EMP-Bomb composed of ancient artifacts. Sloane and Sark captured the mathematician Neil Caplan since they knew he was smart enough to construct such a device. At first, Caplan said it couldn't work, but after Sloane stole a magnetometer from Amcore Bank, he was able to build it.

According to Sark, the bomb was very unstable and had to be managed carefully. Sark was even wary of using it because he stated that if Caplan was even off just a little bit, it could backfire and kill him too (Firebomb).

Sloane traveled to Kandahar to find an ethnic cleanser named Ahmad Kabir. When he did, he asked Kabir to ally with himself since he was going to be running a ruthless empire later in the future and had the forces and technology to do so. Kabir agreed, but only on one condition: He had his ex-wife murdered. In order to show the power he possessed, Sloane sent Sark to Mexico City and activated the bomb. Luckily, Vaughn and Sydney found Gizabi and rescued her before the bomb went off, but 62 other civilians were burned alive in the blast, leaving only their skeletal remains.

Before Sloane or Kabir had a chance to use it again, Dixon and Vaughn found the weapon in Kabir's palace and captured it (Firebomb).