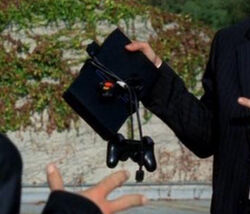 PlayStation 2 was a gaming device created by Sony.

Marshall Flinkman had his PlayStation 2 linked up to his CIA workstation. APO used this as a cover under which to "arrest" Marshall; actually their form of recruiting him to their agency.

Retrieved from "https://alias.fandom.com/wiki/PlayStation_2?oldid=8825"
Community content is available under CC-BY-SA unless otherwise noted.