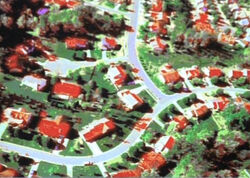 Liberty Village, officially known as Training Section 65B, was an American style neighbourhood build in the backwater of Russia to train recruits to become spies. The facility included all walks of American life; supermarkets, cinemas, bowling alleys and more to immerse them in the American culture.

In the mid-1980s teenagers began to call the section Liberty Village "to capture the sense of American irony", according to Korelka. It was a government operation but became a private enterprise led by the October Contingent.

Sydney and Vaughn, posing as Dmitri and Ileona Tabakov, were initiated to become a part of the Russian programme by Yuri Korelka. They had to undergo several initiation tests, including acting like Americans at house parties, shopping for cars (Training station 327F), but also the ability to assemble guns.

During the training exercise for buying a used convertable, Sydney and Vaughn had to shoot and kill Ken and Linda Taylor as only one couple could continue in the programme. The couple were then to be sent to Chicago to ensure a collapse of a portion of the stock market (using the electromagnetic deivce) which will ensure a "redistribution of wealth". Whilst "Bill Johnson" showed Vaughn some further ways of American life, Korelka showed Sydney how to use the EMP device that the Contingent had stolen. However, Korelka discovered that Sydney and Vaughn were not the real Tabakovs. He planned to kill Sydney and keep Vaughn hostage for interrogation, but Sydney discovered this and killed him before he could her. Vaughn also manage to take out Johnson, and they decided to leave. Running outside of the house a chopper began to shoot at them, so to stop it Sydney set off the EMP which killed all power in a ten mile radius.

They left the facility and it was dismantled by the Russian government.

Retrieved from "https://alias.fandom.com/wiki/Liberty_Village?oldid=6257"
Community content is available under CC-BY-SA unless otherwise noted.