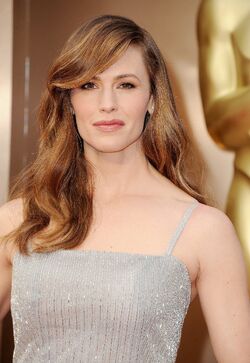 In New York City, Garner earned $150 a week as an understudy in a play. She was then cast in her first television role, a part in the television movie movie, Zoya. Her next acting jobs were in two short-lived television series, Significant Others and Time of Your Life, and a recurring role in the series Felicity. In 1999, Garner was cast in one of the leading roles in the made-for-television movie, Aftershock: Earthquake in New York. For this role, she was required to have her ears pierced for the first time ever. However, once filming was completed, she then allowed the piercings to heal up again. She also appeared in the 2000 comedy Dude, Where's My Car?, playing Ashton Kutcher's girlfriend. In 2001, she appeared as a nurse in the big-budget epic Pearl Harbor, co-starring with Kate Beckinsale and Garner's future husband Ben Affleck.

Later in 2001, J. J. Abrams (who produced Felicity) approached Garner about starring in a new show he was working on for ABC. Garner auditioned for and was cast in the role of Sydney Bristow in the spy drama Alias. The series became a success and Garner won the award for "Best Actress in a Television Series - Drama" at the January 2002 Golden Globe Awards. Alias had just begun a few months beforehand, and Garner won the award with only half the season's episodes aired. The series was successful, concluding in May 2006 after a fifth, abbreviated season (due to Garner's pregnancy, a development that was written into the storyline of the fifth season). Garner's salary for the show began at $45,000 an episode, rising to $150,000 per episode by the series' end. During the show's run, Garner received four consecutive Golden Globe nominations for her lead performance. She also received four consecutive Emmy Award nominations for "Outstanding Lead Actress in a Drama Series." Garner won the "Actor Award" from the Screen Actors Guild in 2005. In March 2005, Garner directed the fourth-season Alias episode, "In Dreams", which aired in May. Garner received producer credit during the series' final season.

She was not a fan of the season 4 main title sequence or Terry O Quinn moving from Alias to Lost During the fourth season.