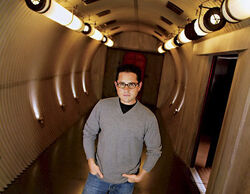 Jeffrey Jacob "J. J." Abrams is the creator of Alias. In addition to creating the series, he also wrote the opening theme.

Abrams' first job in the movie business started when he was 16 when he wrote music for Don Dohler's film Nightbeast. During his senior year at college, he teamed with a friend to write a feature film treatment. Purchased by Touchstone Pictures, the treatment was the basis for Taking Care of Business, Abrams' first produced film, which starred Charles Grodin and Jim Belushi. He followed that up with Regarding Henry, starring Harrison Ford, and Forever Young, starring Mel Gibson.

Abrams collaborated with producer Jerry Bruckheimer and director Michael Bay on the 1998 film, Armageddon. That same year, he made his first foray into television with Felicity, which ran for four seasons on The WB Network, serving as the show's co-creator (with Matt Reeves) and executive producer. Under his production company, Bad Robot, Abrams created and executive-produced ABC's Alias and is co-creator (with Damon Lindelof) and executive producer of Lost. He also served as executive producer of What About Brian and Six Degrees, also on ABC. Abrams directed and wrote the two-part pilot for Lost and remained active producer for the first half of the season before moving on to work on Mission: Impossible III. He later co-wrote the teleplay of the third season premiere A Tale of Two Cities and continues to participate in creative meetings with Damon Lindleof and Carlton Cuse about the direction and mythology of the show.

He made his feature directorial debut in 2006 with Mission: Impossible III, starring Tom Cruise. He also directed the 2009 blockbuster film Star Trek. Abrams is also the producer of the 2008 monster movie, Cloverfield.