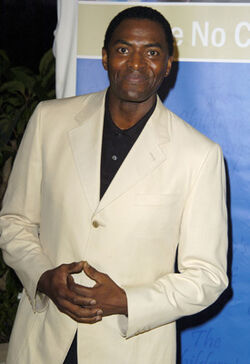 Carl Lumbly played Marcus Dixon throughout all seasons of Alias.

Born to Jamaican immigrants in Minneapolis, Minnesota, Lumbly graduated from South High School there and Macalester College in nearby St. Paul. At one time he was a journalist in Minnesota, when he got an acting job while on assignment for a story about a workshop theatre and stayed with the improvisational company for two years (along with then-unknown Danny Glover).

His first major role was Detective Marcus Petrie on the television series Cagney and Lacey (1982 – 1988). In 1987, he garned positive reviews for his portrayal of Black Panther Party co-founder Bobby Seale in the HBO television movie Conspiracy: The Trial of the Chicago 8.

From 1994-1995, Lumbly starred as the main character in the short-lived sci-fi series M.A.N.T.I.S.. His most visible role was as Marcus Dixon in the American television series Alias (2001 – 2006). Other prominent roles include providing the voice the for Martian Manhunter on Justice League and Justice League Unlimited, and a recurring role on L.A. Law as a college professor unjustly accused of first-degree murder. He also appeared as the voice of the Mayor of Metropolis on the Superman the Animated Series episode "Speed Demons" in 1997. He also appeared as the voice of the villain Stalker on Batman Beyond.

In 2000, Lumbly portrayed activist and Congressman Ron Dellums in the Disney's Channel's original movie, The Color of Friendship. Although the movie was focused on Dellums's daughter's friendship with a white South African girl, the film also discussed Dellums's role in ending apartheid in South Africa.

Retrieved from "https://alias.fandom.com/wiki/Carl_Lumbly?oldid=4319"
Community content is available under CC-BY-SA unless otherwise noted.