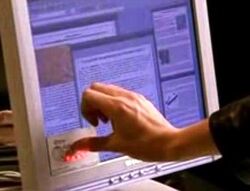 The Business Card was a device with a transmitter inside that could override CPUs and confuse the network so that it would make the firewall think that the user was the System Admin, thus overriding it.

Sydney traveled to Berlin in order to extract Jeroen Schiller and placed the card on his monitor, overriding the Admin and downloading the password and files from Schiller's computer. The files were later uploaded when Schiller was taken to the United States.

Retrieved from "https://alias.fandom.com/wiki/Business_Card?oldid=6106"
Community content is available under CC-BY-SA unless otherwise noted.