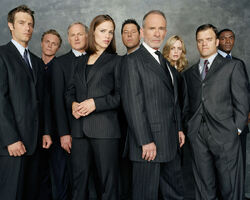 Season 3 of Alias aired from September 28, 2003 till May 23, 2004. It featured Sydney's attempts to find out what happened to her in the two year absence she faced as a result of The Covenant and her efforts to deal with how things changed in the time she was gone.

The third season takes place two years after the events of Season 2, with Sydney having been missing and presumed dead. DNA evidence in a badly burned body confirmed her death to her family and friends.

The truth, however, is that Sydney was kidnapped by a terrorist organization called The Covenant, who tried to brainwash her into believing she was an assassin named Julia Thorne. Eventually Sydney voluntarily had her memories of the two years erased in an attempt to forget some of the deeds she was forced to undertake as Julia and to ensure that one of Rambaldi's most dangerous artifacts would never be found.

As Sydney recovers, she begins investigating her absence while reintegrating into the CIA. There she deals with the facts that Arvin Sloane had become a world-renowned humanitarian after being pardoned, and that Michael Vaughn had married NSC agent Lauren Reed. Reed is later revealed to be a member of the Covenant and a lover of Julian Sark. The National Security Council plays a role as a government organization that holds massive unsupervised power, with a Guantanamo-like detention facility, considerable influence over the CIA, and driven by questionable motives. Sydney later discovers that her mother and Arvin Sloane had a child together, the result of an affair between the two years earlier. She locates her half-sister, Nadia, and rescues her from being killed by the Covenant.

At the end of the season, Sydney goes on a mission and encounters Lauren. After they battle, Lauren begins to taunt Sydney by saying she has information about her past. When Vaughn shows up, Sydney goes to him, leaving Lauren a chance to attack again. Vaughn shoots Lauren, and she dies, but before she does she gives Sydney the number of a security deposit box where she can find information about her past.

A seven-minute animated short entitled Animated Alias: Tribunal was produced for the DVD release of the third season. The short takes place between the second and third seasons.